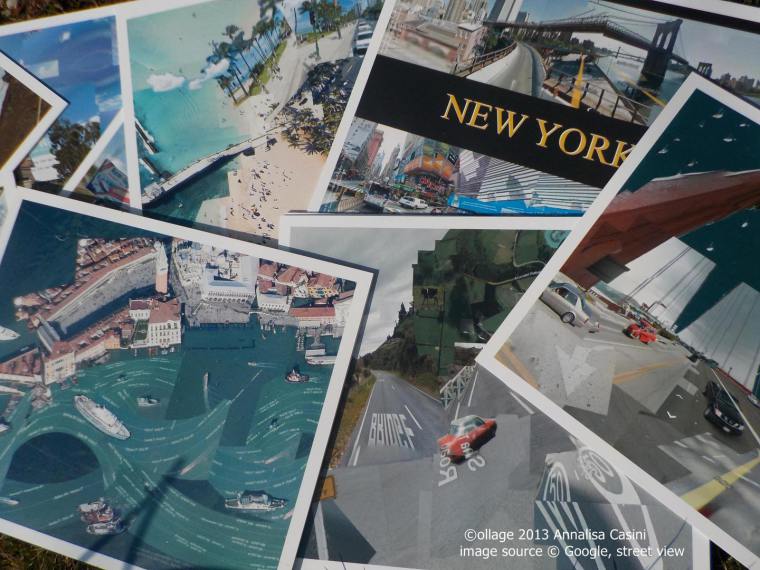 What does "UNORDINARYSETUP DISASSEMBLED" mean?
“UNORDINARY” means out of the ordinary assembly, because, after photographing the site, Google Maps rearranges the photos in the shape of a sphere to re-create the feeling of ongoing space and of moving in every direction; thus, the “SET UP” is unconventional. “DISASSEMBLED” is the style that represents my collages, both in terms of the composition technique and in terms of the transformation of cities into a light and ironic vision of reality.

When did you travel with Google Maps?
I started in the summer of 2011; I wanted to go to New York, but I had no money for the plane, so I decided to explore the city from my computer with Google Maps Street View; it was exciting.
Then I wondered how I could create souvenir photos that would evoke the emotions of the trip; gradually, depending on the subjects I encountered, I started to create collages. Then I set out again; I worked intensively for a year, traveling throughout the United States of America, and in the end I had produced 50 collages and I selected 25 collages I consider interesting for the book.

How do you start creating these collages?
The first phase is based on the pleasure of traveling and discovering new places with Google Maps; then I choose the images and download them one at a time into a folder, it's very exciting not knowing if the elements I choose will be enough to create a collage.
In the second phase, I look at the sequences collected and look for a starting point; with no plan in mind, I follow where the inspiration of the moment takes me. It is a slow phase of research; each collage takes me four hours.
Then I add an annotation on the unusual sights along the way, this book is a travel diary.

What rules did you use?
The only rule was to solely extract images that are only displayed by Street View and Google Satellite: everything I needed, textures, colours, special effects.
This limit was very creative.

Which artists inspired you?
It's not so much a question of names, it's about discovering an urban world through the visual filter of these artists, who have guided me in my creative growth. To name just few: William Klein's photos of the common people on the streets of New York, David Hockeney for his collages using a Polaroid, Stephen Shore for the colours of ordinary places, Hans-Peter Felldemann for the collections of images of pop culture, and David LaChapelle for his eccentric digital photos.

Which style is closest to your collages, to your conceptual or artificial vision?
Neither, it is a new genre both because of the use of the medium of Google Maps and because of the composition technique a blend of my passions: architecture, photography and graphics, and sense of colour. I like to create a light vision of reality, a happy ending like in films.

Can the places you point out be tracked down on Google Maps?
I have omitted the GPS reference for privacy
reasons.

Why do the titles have the words STRIP and MASH at the beginning and what do they mean?
The term STRIP is used in American urban planning to indicate a street with commercial activities; I liked the idea of the long format, understood as a street.
The word MASH means crushed, mixed, puree; these are the second phase of how I developed the technique. It is a mixture of the various levels between Street View and Satellite; the wider format resulted in new compositional ideas.

Call you call discovering the world with Google Maps a real journey?
Definitely; what fascinates me most about this medium is discovering places that are otherwise inaccessible, the freedom of movement, and a number of factors found only in Google Maps photos, I find it a very fertile ground for my artistic career.

A new journey around the world with Google Maps What is different about this new project?

Travelling around the world seeking different subjects to the previous journey, new compositional experiments in open naturalistic environments, revisiting architecture a few times, the project is currently in progress and it is too early to know where this journey will take me. However, I have already produced nine great collages, two of which are very significant in terms of technique;

I am revealing these in advance.